Dylan loved Christmas this year. He still doesn’t quite *get* it, but when asked what Santa/Father Christmas says he goes: “Ho ho ho!” rather cutely. We put one of our homemade biscuits on a plate plus put a bit of milk out and left it for santa as we told him that he was bringing presents so it was our way of saying thank you… but he was a very naughty boy ALL DAY, and being told that santa wouldn’t bring presents to him just made him laugh at us because he didn’t understand what was going on, but I did say if he gave mummy a big kiss and cuddle that I would put in a good word.

He had a Miles blanket with his name on plus wall stickers for when we paint his room (though he’s not as enthusiastic as he was about the show, and rarely plays with his Miles toy, he still likes it. I recorded 4 DVDs worth of the show before we moved so he still has them to watch) He got Spider-man Duplo and a wooden tool box with tools and screws, a colouring book and a selection box. In his stocking was peppa pig bubble bath with wand to blow bubbles in the bath, toothbrush, peppa pig tooth paste, chocolate coins & a Spider-man surprise egg… He has been obsessed with “surprise-y eggs” (as he says) videos on youtube, for him it wasn’t so much the toy that was inside but the experience of opening the egg to see what was inside and eating the chocolate… and mummy now has a rubber spiderman charm to use as a keyring on my keys! Trust me, surprise eggs will not be a regular occurrence! I do not need the extra clutter! 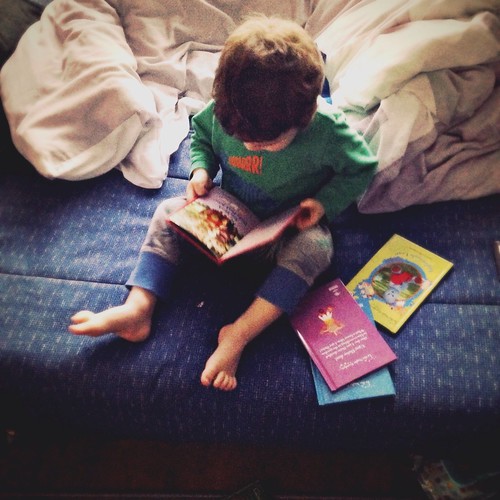 Gareth was a little concerned that it wasn’t enough, but I knew it was plenty plus he hadn’t received his gifts from any of his grandparents. I truly do not want to be dealing with an absolute ton of stuff at Christmas and wondering where on earth I am going to put everything! Dylan still prefers to “help” and play with things that aren’t toys, but he is really into cars or pushing things along the floor like a car regardless if they have wheels or not lol, and his happyland sets more recently where it holds his attention for a while and makes cute jabbering noises while playing. 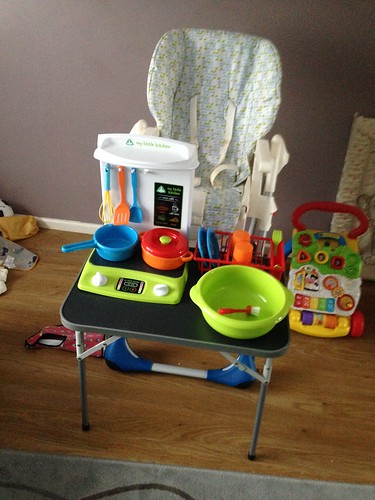 From his nanna, he received a table top kitchen (as requested), because he often liked playing with his girlfriends kitchen but I didn’t want it taking up a lot of space and worrying about where it would be stored. We have a fold away table that we put it on and it comes apart and stores nicely in a box on the kallax ^_^ 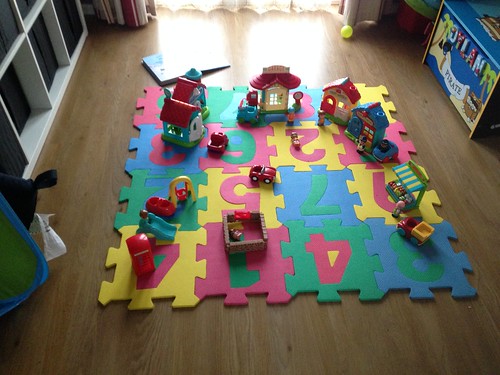 From Nanny and Grampy he had some Happyland to add to his collection, so I took his entire collection and set it up in his play area (aka the dining room… We are going to be getting a fold away dining table at some point that will just go against the wall where his toy box currently sits) Again all of it fits into a kallax box. As I write this, he has his tent and tunnel out in this area 🙂 It is simple to get things out, put them away and change things up each day, otherwise things can quickly get out of control.

He got other toys/puzzles/clothes that I have simply put away for now in his wardrobe. The CAT digger will go in the sandpit once the nicer weather comes so sits (between being played with) on top of the toy box. My aunt popped by yesterday, and with her gift I am taking Dylan to Go Bananas as he loved the soft play the other week and keeps asking to go back but to be fair our “local” one it is a bit of a rubbish one (I may or may not have smuggled him into the older kids side while it wasn’t being manned but he was still too small for it and wasn’t able to climb a lot of the parts so I had to carry him. He loved it, I was exhausted after an hour of going between the baby/toddler section and the older kids side!)

The weather hasn’t been particularly the best, though yesterday was nice and sunny, it has been raining lots, high winds and very dark in the house (as you can tell from the photo of Dylan reading “In The Night Garden” books) He doesn’t read very often, so I loved to see him reading yesterday! He is very much an on-the-go toddler with a short attention span. I do admit that I suffer with short attention span too! We are spending this time between Christmas & New Year just being together as we don’t get to do it very often. I am back at work this weekend and Gareth is back to work on Monday.

I also uploaded the tour of the flat before we moved out, to YouTube the other week. Blog post for another day though unless you want to check it out over there (mmmbisto)