My little artist made a pretty picture (with the help of mummy of course) at group the other week, and it seemed fitting that it wasn’t just displayed at home but also as my Facebook Header picture, because that is equal to the fridge at home, right? LOL

The Konmari journey is going slooooooooow. 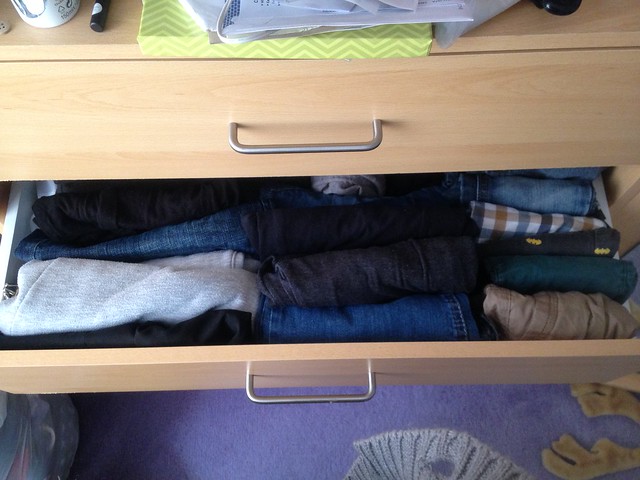 However, even if we have only done some of our clothes so far, I have certainly noticed a difference! As you can see above, this is mine and Dylan’s “bottoms” drawer with trousers, shorts etc in. Dylan’s clothes no longer fit in the plastic craft tower thing, and there most certainly isn’t enough room for him to have his own wardrobe/drawers, so Dylan’s stuff is in with mine. He has a “row” down the right hand side of my drawers. Even Gareth has embraced it and sorted his clothes out too, and it is so much easier to find and get to those things. Granted I am still feeling ridiculously overwhelmed about all the other categories but knowing how much our clothes is better makes me super determined to declutter!

I have new glasses, but since I got them Wednesday last week, I’ve not had much time to wear them. Dylan notices my glasses are different and is super grabby with them, and it’s always a pain in the tush to get used to new glasses anyway, so I probably haven’t been trying as much as I should do to make the time to wear them either. I’m on that.

Dylan pretty much comes straight to bed with me, we don’t even try and force him to go in his cot at the moment, as he just screams and bangs his head against the side on purpose. It seems ALL of his back teeth are now coming through, poor little guy.

The one morning when I had just a couple of hours sleep, I popped him straight into the travel cot with some toys so that I could lay down for an hour on the sofa, and in the hopes that when he had his daytime nap that I could catch a few Zzz’s on the sofa, but I struggle to nap during the day (delightful neighbours), but he came and had cuddles with me after that hour.

He does some cute little things now:

Gareth got a new job which is a huge promotion at his workplace, and though he’s busy he has been loving it so he is happier. And for years I have been using the “Ace Budget” app for iPhone to keep us on track (luckily I was taught well with money and how to budget. I remember when I was looking to move into my flat in 2007, my dad sat me down and went through a budget with me on paper and we made sure I would be able to afford it before I moved. I still use a version of that budget to this day!). It worked OK and I never thought much of it after that as I spent money I logged it in the app against each budget and it did the job. But I heard about “You Need A Budget” or “YNAB” for short, and I decided to give it a go on the free trial. I’m about a week and a half (I think?) into it and I adore it! Though I kept a running total of what YNAB calls “rainy day funds” (glasses, christmas, car insurance, etc) on a spreadsheet and it suited us OK, I’m thinking this is a much better way to go to keep track of everything. I still have my super spreadsheet as that’s my “thing”, but for day to day spending and shifting things around and basically seeing it much better that way, I’m definitely going to purchase YNAB 🙂